Studies have shown that owning pets can decrease stress levels in not only adults, but in kids too. Nationwide Children’s Hospital says that, “Physical touch decreases violence, builds trust, boosts our immune system and reduces stress.” The hospital also states that humans have a “psychological need for physical touch”. The Human Animal Bond Research Institute (HABRI) states that studies prove children who own pets develop a strong emotional bond with their pets.

One study looking at children and dogs vis-à-vis stress and social support showed that children’s stress levels decreased when they were in the presence of dogs. The study also points out that one reason people love dogs as companions is because they’re not judgmental. HABRI goes on to explain why this is so important, stating that, “the feeling of evaluation or judgement in social settings is one of the major triggers for socially related anxiety issues.”

Another animal that has been proven to help children’s social development is the horse. HABRI mentions a study that showed that horses and dogs when kept as pets have increased “social circles and the number of human contacts in children, which can increase emotional health outcomes such as self-esteem.”

Nationwide Children’s Hospital also states that pets have a positive effect on a child’s social development. When we own a pet, we care for them and bond with them. This compassion can be translated to social interactions between children. Owning a pet can especially help shy kids become more comfortable in social situations. 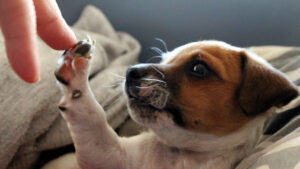 An unfortunate fact all over the world is that there are children who have serious illnesses which require frequent medical visits and even hospital stays. These situations can be very uncomfortable and stressful for children. Fortunately, pets and animal-assisted therapy can help with this. Dogs have a calming presence and can make a foreign place, such as a hospital, seem more familiar to them, according to HABRI. One study on animal-assisted therapy in hospital settings showed that animals helped make the hospital experience feel more normal with kids and their families.

Another study of several thousand children with cancer showed that animal-assisted therapy helped them tremendously in terms of pain, stress, anxiety, and more. It was even said that these results could be directly linked to the human-animal bond. HABRI mentioned a different interesting study involving children getting their blood drawn and the presence of a dog during the procedure. The study showed that in kids aged 4 to 11, the stress levels of children in the presence of dogs were affected more significantly than in children who were not.

According to Nationwide Children’s Hospital, owning a pet makes people, including children, feel less lonely and depressed. Personally, when I’m having a rough day, I am reminded that I’m not alone and I have a furry support system. My dog reminds me that I am loved, and they depend on me to take care of them. HABRI mentions a study with teens and pet ownership. The results showed that teens who owned a pet felt significantly less lonely than other classmates who did not own pets.

There have been many studies about youth who have experienced trauma and received animal-assisted therapy to help with their symptoms. HABRI states it has been proven that animal-assisted therapy can improve daily functions in children and teens who have experienced trauma, such as, “enhanced mental wellness, quality of life, and improved maintenance of long-term mental health conditions.”

One study looked at the effects of animal-assisted therapy, specifically dogs, on children and teens who had been sexually abused. The results showed that kids and teens who had therapy dogs “showed significant decreases in trauma symptoms, including anxiety, depression, anger, PTSD, and dissociation.” Another study that HABRI mentions is about children with ADHD and whether or not animal-assisted therapy used in addition to cognitive behavioral treatment (or CBT) would help with their ADHD symptoms. The results showed that children who had animal-assisted therapy, in addition to CBT, showed a decrease in their ADHD symptoms than in kids who only received CBT treatment.

In our previous article, we’ve seen how owning pets can improve an adult’s mental health. Now we’ve seen the mental and developmental health benefits of pet ownership on children. From stress and anxiety, to child development, to trauma, there’s no denying that pets can and will greatly benefit kids in a unique way that humans just can’t. I personally have been around pets since I was born, and I cannot imagine my life without them.